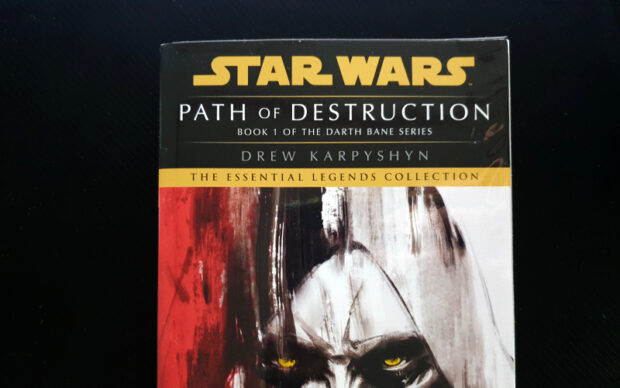 Have you ever wondered how it is like to train in the Dark Side and experience life in a Sith Academy? If you’re coming from Star Wars movies, then maybe you’re wondering what I am talking about. There’s no such thing as a Sith Academy. The Sith are few, trained in secret and used as weapons by the Darth, the Sith Master. But why is that?

A long time ago, in the same galaxy, there was a war between Sith and Jedi. And the Sith and Jedi were many, and both had schools and whatnot.

And if nothing of what I say makes sense, go watch any Star Wars (though some movies are awful) – I heard it’s a very famous part of Disney palette nowadays.

Darth Bane: Path of Destruction is the first of a trilogy of books written by Drew Karphyshyn, the same guy who worked as a writer for the game Knights of the Old Republic. I could write a few blog posts about that game but just let me tell you that was the moment when I realized I love Star Wars, especially the old era, probably because its story was about mature and philosophical topics, and less about catering to kids of all age.

This new edition is a reprint into a new Del Ray collection, The Essential Legends Collection. As you know, when Disney acquired the Star Wars trademark, they eliminated all the published books from the canon. There were a few gems in those books and probably they notice that too, so in 2021 they re-release the best stories of the Star Wars Extended Universe into this ongoing collection, with new covers, fit not only for Star Wars fans but also, for fiction fans.

Darth Bane’s cover art is simply gorgeous, not at all looking like pulp fiction, as the previous edition looked like.

Into the thick of it

Darth Bane’s story has all the similarities with the Star Wars stories about the chosen one. Des is a fully-grown adult, working the mines on one of the Republic planets of the Outer Rim. One night, he kills in self-defense a drunk Republic soldier. Knowing nobody will believe him, he must flee to the other side and enlist with the Sith army. Here he repeatedly disobeys his general and brings victory after victory. As punishment, he is sent to the Sith Academy on Korriban to learn the ways of the Sith Masters. What follows is something out of Harry Potter if Hogwarts were focused on individual power and betrayals between students who don’t always survive even a friendly duel.

When the book focuses on Des/Darth Bane’s point of view, it does what it does best. Unfortunately, there are a few relatively big sections focused on the war between Sith and Jedi and, while these sections are full of action, they seem to slow the story down. I understand the motivation to add battle scenes. Darth Bane’s development is slow, full of meditations and learning about the dark side of the Sith, and apparently, doesn’t have enough action. But in my opinion, this is the best part of the book, and not the lightsaber combat (blasphemy, I know).

Additionally, there is also a bit of a speedup in Bane’s character growth once he understands how the dark side of the Force works and he becomes super powerful. He’s still young and prone to mistakes so it doesn’t remove the whole tension, but he’s suddenly way too powerful, compared to everyone else, and I would have liked to see a slower growth of his powers.

All in all, it’s a good standalone read, even if you’re not familiar with Star Wars Universe. You may have to google some types of alien and weaponry, because there’s zero description except the name, and it’s assumed you know what they look like. But you can always read it as another type of fictional alien/weapon/culture, that is not important to the main plot but it’s a part of the universe. Everything important to the plot, even little details, has enough explanation that you would not get lost. Still, it’s better if you at least watch some movies so you have an understanding of the Force and the two opposing forces, Sith and Jedi, even if the events of the book take place about 1000 years before the start of the original movie trilogy.

You should read it if…

It’s easy to recommend this book to someone interested in the mysterious ways of the Force and the mythology of the Sith Lords. Of course, if you’ve ever played Knights of the Old Republic, this is a mandatory read. While not as rich as the game story (hey, it’s a save the galaxy type of story), it explores the transition from many Sith armies to a few Sith working in secrecy, surrounded by rumors.

For anyone else interested in Science Fiction Fantasy (though it leans more towards Fantasy), I can still recommend it; it’s vastly different than the movies, and I didn’t particularly enjoy the present-day Star Wars. The Old Era, including this book, has that feeling of reading some fantastical mythology, and thus, is more to my liking.

As a fan of the Old Republic and the philosophy of the Dark Side, I’d give Darth Bane: Path of Destruction 5 lightsabers out of 5.