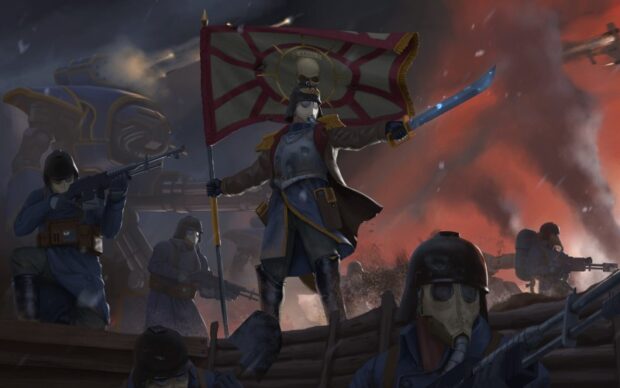 Dead Men Walking starts with a Necron invasion. But who or what are Necrons? The Necrons are the terminators of Warhammer 40K Universe. Hard to kill, they always get back up, made from a self-repair metallic skeleton. How in the Emperor’s name do you defeat these things? Of course, you call the…

Nope. My mistake. Not this time. This time, the space marines are busy.

You call the Imperial Guards made up of simple soldiers, humans versus an unlimited number of Necrons. Surely this doesn’t sound good. Okay, then let’s bring the Death Korps of Krieg, which are humans that act like machines, don’t have names, and are willing to die at command.

Dead Men Walking is a gem of a book, written by Steve Lyons. In the vast ocean of Warhammer literature, sometimes brilliant writing like this one appears. What makes this book special is that the author is not interested in getting the lore of Necrons right (blasphemy). Or even the Imperial Guard. What he aimed in this book is writing a human story about well, dehumanization, without glorifying war.

It’s a standalone entry, with only minor references to the vast Warhammer Universe. It is perfect for a beginner, although it helps to understand the enemies of the Imperium and how their military works. Nothing that 5 minutes of Google can’t solve. So in a way, it’s the most approachable book. On the other hand, it’s so bleak and devoid of joy, a true grimdark novel, that it has the potential to paint a wrong picture of the Warhammer 40K universe. Sure, W40K is grimdark but most of the tales are tales of heroism and war and action and bigger-than-human figures, sometimes silly tales. There is nothing like this in Dead Men Walking, and that’s why I loved this book. But as I mentioned, if it’s your first book, it would create false expectations from the Warhammer Universe.

At its core, Dead Men Walking is the simple story of The Death Korps of Krieg fighting a war against Necrons. It’s mostly told from the point of view of human characters that get trapped in this war. And they struggle to survive between the inscrutable Krieg and the soulless Necrons.

Despite this, the story is not simple and requires a bit of the reader’s investment. Most of the Warhammer novels don’t require much thought. Of course, compared to a normal SF novel, even Dead Men Walking is not so difficult. The chapters are long and told completely from one point of view. Sometimes it takes several long chapters to find out what happened to a specific character, so keep that in mind and don’t forget them.

The other important point is the glorification of war and the lack of it. Compared to normal Warhammer 40K, where war is a standard business and brings to mind satisfactory action scenes, this story is against all that. It relies on other feelings and less on battles. Even when action is present, it’s completely devoid of heroism. If heroism is present, it will most likely end with a hero’s death. It’s a war novel that will make you not want to read about war anymore.

It will play with your feelings until you start to hate everyone in the story. While it’s a good story with plenty of character development, the lack of any kind of joy or humor and the heavy hopelessness may make you reticent to keep reading it. But if you’re looking for this type of book, you’ll be happy to know you can find one even in Warhammer 40K.

Between you and me, I expected all books to be written in this tone. After all, Warhammer and grimdark stuff go hand in hand (but it’s the only book I truly believe is grimdark in the whole W40K).

I already mentioned above who should read this book. Beginners to W40K with clear expectations, those looking for a bleak book on war, and fans of Warhammer who are looking for a break from the generic light reading. So instead of going to read a book outside the universe, why not read this book, which is nothing like a normal W40K novel?

I rate this novel 5 lasguns out of 5 with the mention that it’s not perfect. But my excitement in discovering a book that truly touched me in Warhammer Universe contributed to my biased rating.