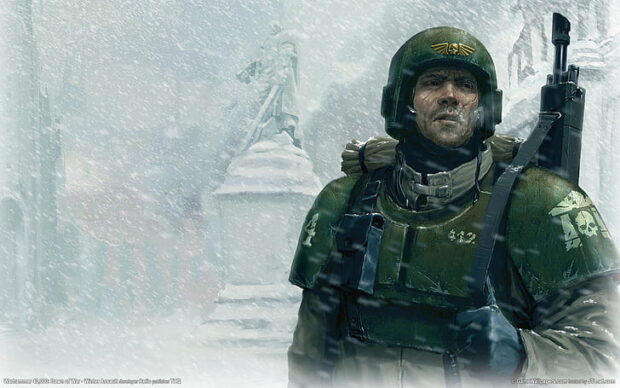 Do you ever think how awful war is? Especially when you don’t even have a choice about it. Your enemies will kill you because they are mindless beasts who only want to make war (or WAAAGH!) and your allies will kill you if you don’t respect orders, even if these so-called orders are sometimes nonsensical and will guarantee your death. Yeah, that is what it is to be a simple human in Warhammer 40K. The book Fifteen Hours will show you exactly this.

The short novel Fifteen Hours by Mitchel Scanlon delivers a breath of fresh air in a universe populated by post-human Space Marines, god-like humans fighting terrible powers from the warp, and alien entities that could kill a single human with a flick of the wrist. The title Fifteen Hours refers to the average human lifetime in the trenches of war in this universe. It is a standalone novel in this Universe. The book can be an entry point if you want to know about the lives of regular humans. There are some little pieces of lore, but you don’t need to have any preexisting knowledge to enjoy this story.

Fifteen Hours reminds of the War World I war stories. The exception: the human enemy is replaced by orks. So trying to escape to the enemy’s lines is not an option any longer, no matter how badly your own team treats you. Less moral dilemmas, but more personal conflict.

In Fifteen Hours, we follow Arvin Larn on his journey from a young farmer’s son to war against the orks. After his recruitment, he goes through a short training period. Following that, he has to join a military campaign as part of the Imperial Guard. Because the Imperium relies on a big bureaucratic system, Larn’s company ends up by mistake on a different planet, in a hopeless war against orks. Here he must learn the way of life of the Imperial Guard, always fight against overwhelming foes.

The novel starts with Larn’s death. You will be curious if he can be saved or if the novel will end with his actual death. It’s a cliche that works better in movies, I think, because we already know too much and the tension is lowered. Nevertheless, the simple, clear style focused on the character’s feelings and thoughts made up for it. The style made this book a joy to read. Once you read a battle scene, you’ve read them all, so there’s no point in rereading them. But the character’s dilemma always makes up for an interesting reread, so in my case they never get boring. I really appreciated the short battles or fade to black battle scenes that appear throughout this book.

I know it’s weird because it’s a book solely focused on war, at least 15 hours of it. But it seems there is more to war than battles and killing.

I liked the characters all right. They are all some sort of stereotypes, but in this book, they work. The stereotype makes the characters more relatable and allowed the author to write a shorter book without focusing too much on developing each and every character.

Unfortunately, the ending of the book is lacking. It feels very unsatisfying, without being disappointing. I agree, after all, it’s a fitting ending, but it’s not a satisfying ending because many characters’ fates are left in the air. I know the focus of the book is on 15 hours. What events and character development may happen, they happen in this span of 15 hours. It’s an interesting concept, but one that could have benefitted from another hour that dealt with the fates of every character encountered. Like an epilog of sorts.

I can easily recommend this to every SF fan or fan of war stories. It’s one of the Warhammer books that doesn’t make war a glorious thing and stays true to the definition of grimdark. So add that up. I will recommend this book to grimdark fantasy fans, as well.

I give this book 4 out of 5 hours of wartime. It’s probably the time it will take you to read it at an average pace.

[…] call the Imperial Guards made up of simple soldiers, humans versus an unlimited number of Necrons. Surely this doesn’t […]

[…] than many Warhammer 40k books, but I wouldn’t call it excessively humorous. To be honest, I found Fifteen Hours by Mitchel Scanlon to be more humorous, because the humor there naturally arose from the absurdity of the situation. […]

[…] of Angels, written by Mitchel Scanlon, is the 7th book in the Horus Heresy series of the Warhammer 40K universe. It is the first that can […]