Hero of the Imperium Omnibus by Sandy Mitchell – Review 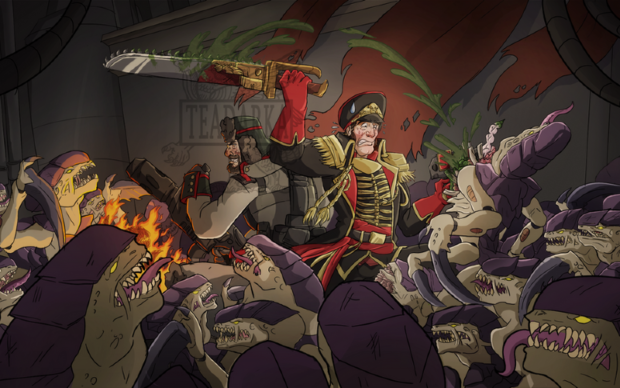 The best time to run is just before you see the enemy. That is because you can still keep your heroic appearance if your soldiers won the battle. And if not, at least you get to live another day. And serve the Emperor in another war. But mostly you get to live. And that’s how a hero of the imperium is made.

The adventures of Ciaphas Cain, imperial commissar and unlikely hero, start in the Hero of the Imperium omnibus, where only the finest heroic tales are collected by your favorite inquisitor, someone you’ll soon meet in the first book.

Hero of the Imperium – quick overview

Hero of the Imperium omnibus, written by Sandy Mitchell, collects the first three novels in the Cain Ciaphas series, and a few short stories. Released for the first time in 2007, it contains the novels For the Emperor (published: 2003), Caves of Ice (2004), and The Traitor’s Hand (2005), as well as the short stories Fight or Flight, Echoes of the Tomb, and The Beguiling.

It is often said that this is the most humorous series of the Warhammer 40K Universe, and if you’ve only read Space Marines stories, you already know almost anything is more cheery than those guys. Cain, while still heroic by any standard, is very concerned about one thing: how to stay alive and look good doing it. People say it resembles Blackadder in space (Warhammer 40K Universe, more specifically), but as I never watched that series, I don’t know what to tell you.

Having read it, I can tell you it has more fun and soul than many Warhammer 40k books, but I wouldn’t call it excessively humorous. To be honest, I found Fifteen Hours by Mitchel Scanlon to be more humorous, because the humor there naturally arose from the absurdity of the situation. The humor in the Cain Ciaphas series is, well, forced. Which is not bad per se, but we can tell.

Hero of the Imperium – the good and the bad

First, I need to mention the short story Fight or Flight, which is delicious. No wonder fans wanted more Cain after that story and no wonder Games Workshop gave this character a full series. It must be one of the most fun SF fantasy stories I’ve ever read. Compared to the rest of the novels, the humor here comes forth because of the personality of the main character, Cain himself. If you have to read one thing, read this short story. And then if you want more, well, there’s always more Cain.

For the Emperor follows Cain at the command (spiritual command) of a fragmented Valhallan regiment, where he has to unite the regiment before coming face to face with the enemy. He doesn’t meet the enemy straight away. First, he has to deal with the unstable political situation on Gravalax where he meets the tau aliens. These aliens want to talk to him, and of course, Cain is Cain. Sometimes silly, sometimes confused, but always a hero.

Surprisingly, he always makes the right decision and if you didn’t know better, you’d call him a coward. I never got that impression despite his self-deprecating humor and mindset. I think the nature of Cain works best as episodic adventures. Indeed, even this novel feels a bit like a series of episodes, albeit interconnected. On one hand, For the Emperor was a breath of fresh air in the over-the-top serious novels of the W40K. On the other hand, it’s almost forgettable, compared to the short story that precedes it. Nevertheless, I had a lot of fun reading it and I only hope that future novels will improve in character and plot, as well as, the fun department.

Caves of Ice follows commissar Cain on a frozen wasteland where he will have to fight Necrons and Orks or, at least, run away from them. There’s a bit more development, including naturally hilarious situations and commentaries from the commissar himself. I don’t know how, but this book, with a simpler plot, flowed better than the previous one. Also, I didn’t find the jokes so forced. Quite the opposite, the situation was in itself funny at times. The commissar was sometimes expressing the reader’s thoughts if the reader tends to treat absurd action-filled situations with humor (meaning me). It’s not only commissar Cain that has those thoughts, but also me every time I read an all too serious account of events of space marines fighting serious wars in Warhammer40k.

In The Traitor’s Hand, we meet Chaos. Oh boy, finally, Commissar Cain has to deal with two forces of Chaos – Slaaneshi and Khorn cultists, which luckily for him, they prefer to fight against each other. The thing with the last book is that it’s more of the same, minus the witty dialogues and character development. In other words, BATTLES. Tons and tons of battles, something you already know it’s my least favorite thing in the Warhammer universe. I may be atypical. Anyway, if battle campaigns are your taste but you’re sick of serious and grim descriptions, you must read the third book in this series. It’s full of battles described in a witty, sarcastic, “I hope I can survive this” type of speech (still repetitive though).

You should read Hero of the Imperium if…

I recommend the first omnibus of Ciaphas Cain adventures to anyone who likes humorous, sarcastic military grimdark SF – which when I put it this way, it’s one of a kind.

Trench coats. I don’t know why, but I imagine the commissars like the most fashionable guys in the army, with fancy long trench coats and cool hats. So 4 out of five (5) trench coats for this one.