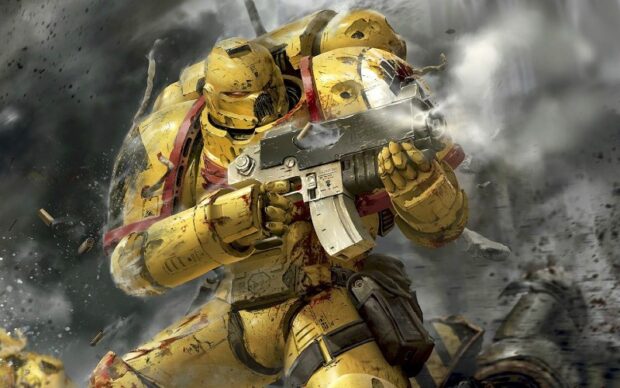 I’ve read Space Marine so you don’t have to. Though I will strongly encourage you to read it to form your own opinion. Are you vaguely familiar with the Warhammer 40K brand? But not so much that you won’t get distracted by the wrong lore? Do you like space soldiers and weird adventures? Are you a fan of uncommon words and poetic language when describing the dismemberment of an alien creature? Then maybe this book is for you.

Space Marine was published in 1993, long before Warhammer 40K became what is today (there is even a streaming platform called Warhammer Plus, who would believe this?!). Needless to say, Ian Watson worked with what he was given and so Space Marine has the most recognizable elements of Warhammer 40K, but also a lot of stuff that would not be accepted today as standard lore. In addition, the author also took a lot of personal liberties and made Space Marines even weirder than they were in reality. And I mean, way weirder. I’m afraid to even mention one minor scene for fear of spoilers because these weird scenes are the best part of the book. Okay, I can’t help myself. I’ll mention one. They eat shit, literally. Why? It’s in the novel.

Should I mention that there is little plot and the novel Space Marine acts as an introduction to the weird, bizarre world of Warhammer 40K? And yet, because it’s no longer part of the modern Warhammer 40K, must stand on its own? And it does, largely by the strength of the world-building.