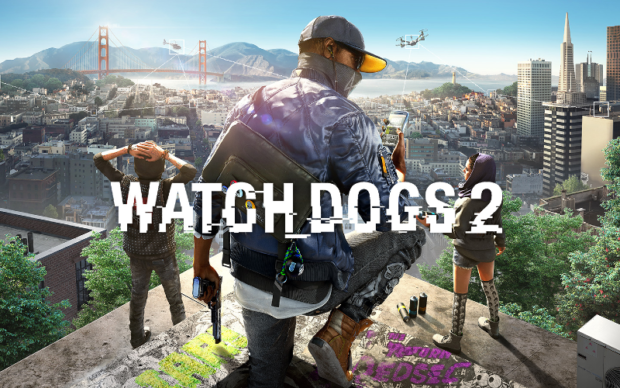 My biggest regret is I couldn’t get off my phone fast enough. He finished throwing up and then he neatly comb his hair, straighten his jacket, and was on his merry way.

Another failure. I’m still following him, in the focus of my smartphone lenses, when a woman decides to show off her bottom while sticking her tongue at me. Whatever passes for photobombing these days.

I sigh but Marcus doesn’t. He’s trying his best at an awkward smile and takes a selfie with the lady. She is not in high spirits anymore. Approaching us, approaching me, she spits insults and makes obscene gestures. Another day in the beautiful San Francisco, where people are crazy and life is good. Must be something in the air.

This is Watch Dogs 2 at its finest. Not its best, not its worst, but its finest. Because it allows that experience of being in a virtual city. Of course, it’s a contradictory experience. You push someone by mistake, someone calls the police. All good, maybe you deserve to get reprimanded for your rash gesture. So, you calmingly move towards the police officers to explain the situation. They start screaming, guns in hand. You try to put my hands up. They don’t care. They start shooting… and you’re dead. Illusion broken.

Driving through an open city is a joy, right? You know what’s more fun than driving recklessly? Driving legally and feeling the pulse of the city. So you climb up in your new Lamborghini, which is named something else for copyrights reasons, and you accelerate slowly. The car jumps forward and almost hits the first thing it encounters. You smashed the brake and the car stops, tires screeching. Then, as in a dream, your car starts moving in reverse and hits a pedestrian.

But you’re stubborn because you’re a man (read human) and you want to live your simple hacker life. So you strive to control your car. There’s even a button that restricts your car speed to the traffic rules (Ctrl on PC). Even that is not too reliable for the moments when you want to ride on the highways. But it’s a start. Armed with your smartphone and your choice of transportation, you’re ready to start your virtual tourism adventure in San Francisco and the surrounding areas.

And this is Watch Dogs at its finest when it allows you to engage in the virtual life of a powerful hacker called Marcus Holloway. I say powerful because he cannot die or do mistakes. After all, he’s the main character, the only avatar you can control.

In my previous article, I introduced the concept of games as experience and why we are still years away from creating the perfect medium to deliver a full experience. But fret not, we can have access to limited experiences in games as defined there. And this is where Watch Dogs 2 comes in. How to create the experience? Play on the realist difficulty and remember Marcus is you, a frail human with hacking skills. He shouldn’t know how to use a gun, so arm him with a stun gun and his gadgets and send him on his way. Drive slowly, take pictures, talk to people, don’t engage in weird behaviors. Complete your missions, or create your own missions.

What is there to say about the game? A lush urban jungle where you’re the apex hacker, finding your ways through vents, through the air, and you’re sneaking around, and running away. You fight an evil corporation that tries to use people’s data for personal profit and did I mention, the bad guy is a yoga-loving hipster with a bun? Yeah, that’s all. Forgettable characters and not enough depth to the story, although it covers important discussion points for the 21st century and where we’re heading, if we’re not already there.

What I liked: the in-your-face parody of big tech companies: Facebook, Google, Windows, Apple, I’ll let you discover who’s who in the game. Oh, and let’s not forget Scientology and Tom Cruise. They’re there, under another name of course, sillier and bigger than life.

Other well-done points? Transexual characters. Finally, a game that gets them right. And guess what, to get them right, all it takes is to treat them like human beings, with motivations outside their sexual orientation. Don’t make a big deal out of it but show how it can affect their life. I’m not a fan of LGBT stories just for the sake of LGBT, but I also admit we need more diversity in our stories. Again, diversity doesn’t mean “Look at me, I’m so different, give me attention“. We need more of the “Look, he’s different, she’s different, we’re all normal“ kind of speech.

Also, another good job with Marcus. The color of his skin is largely forgotten (he mostly deals with hacking problems) but it comes into focus at a few crucial moments as nice commentaries (for today’s society).

And here’s the obligatory trailer. It’s old, but it gives you an idea of what this game is about. Maybe it will make you want to pick it up again.

Back to the experience.

On one hand, Watch Dogs 2 is a mediocre game. The shift from the seriousness of the first Watch Dogs to the silliness of WD2 was jarring to me. I much prefer my stories to be personal with a strong motivation than a series of slightly connected “let’s fuck with big corporations“ type of missions.

On the other hand, it really delivers an immersive experience (if you’re looking for this kind of thing). Car speed control, realistic difficulty, the focus on tools and hacking less than on weapons, tourist attractions, lively and reactive NPCs, they all contribute to a world that seems alive. It is indeed a complete experience, even though the illusion is broken so many times by the seamless multiplayer online component and other strange in-game behaviors, caused probably by the limitation of the game engine. To play this game as an experience, you must make serious efforts. But I appreciate the option, and that’s why Watch Dogs 2 gets a place on my list of Almost Barely Games as Experience.